“Every good gift and every perfect gift is from above, coming down from the Father of lights, with whom there is no variation or shifting shadow.” – James 1:17

I love Christmas – the joy and festivity in the air, the lights, the music and friendly smiles. I love the way people can go out of their way to be cordial and neighborly, extending kind gestures in ways that are often unexpected, giving gifts that, whether they recognize it or not, point back to the birth of a baby boy over 2,000 years ago. A baby boy whose advent had been predicted and anticipated for hundreds of years and yet, whose sudden appearance in an obscure place seemed to take everyone by surprise. 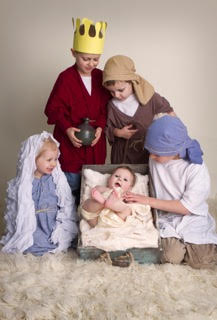 God’s people had been waiting and longingcmas2 for his arrival but they were expecting more of a conquering king; a political savior and religious leader who would play by the rules. Mary and Joseph held their firstborn son, not in the comfort of their home with adoring family and friends, but huddled in a cold and lowly stable they shared with some animals and a few shepherds who had just received a celestial invitation. Not exactly what the young couple might have expected, but far beyond their wildest dreams. The heavens erupted in praise. The angels looked on in wonder.  The shepherds knelt in reverence as the tiny Prince of Heaven locked eyes with his earthly parents, and Mary and Joseph rejoiced.

I love to watch the pure excitement on children’s faces as they gather around the tree. My younger grandchildren can hardly contain themselves. In fact, they have forced me to become more creative with the gift wrapping because the little urchins will gang up on me and somehow figure out who got what, thus spoiling the surprise. I have been known to employ riddles, numbering systems, color coding and themed gift wrap to help preserve the suspense and while they’ve never met a gift they didn’t like, they are naturally drawn to the biggest, brightest and most colorful packages, mesmerized by the possibilities contained therein.

Although I wouldn’t accuse my Heavenly Father of resorting to such trickery,  I realize how very childlike I have been in my expectations and yes, demands. For I desired only the gifts that looked like blessings to me – the brightly wrapped presents that everyone else would admire and crave. The exciting and noteworthy things that would announce to the world that I somehow deserved the goodness that had come my way.

“Beware in your prayers, above everything else, of limiting God; not only by unbelief, but by thinking that you know what he can do.  Expect unexpected things ‘above all that we ask or think.'” – Andrew Murray

I blush at my youthful dream of becoming a songwriter. I knew that God had gifted me. Surely the songs would flow effortlessly and pain-free from my pen and paper to the ears of eager listeners who would anticipate with enthusiasm each new offering. I was naive in expecting that my songs would be recognized and sought after, that I would be “discovered.”  Well, they weren’t, but I was – discovered, that is, by a God who could see through all my delusions and superficial requests. He knew exactly who I would become, where I needed to be, and how he would get me there.  With utmost patience, he continued to surprise me with a lifetime of unexpected gifts.  Some actually looked like blessings and I shared them with excitement, while others came wrapped in heartache and I stared at them in disbelief from a lonely, impoverished place, not understanding until much later that all were tied with ribbons of goodness and given in the fullness of time to carry out his perfect plan.

So this Christmas, whether you are rejoicing over the many good things the Lord has bestowed upon you or struggling under the weight of an unexpected circumstance too difficult to carry, remember – they are all good in the Father’s gift-giving plan.  Take a moment to look for those ribbons of goodness and let his sweet presence fill your heart with comfort and joy.  Though born of humble means, these gifts can lead your soul to greatness.

“…and I thank you, Lord, that when everything’s put in place,
out in front I can see your face and it’s there you belong!” – Dan Burgess

Have a blessed Christmas!